I *gasp* make homemade treats at Halloween.  I only offer them to kids who are with thier parents, and ask if it is OK for their child to have a homemade treat.  I have never had someone turn me down.  We can't possibly make enough homemade treats for all the kids who come on Halloween, we have several hundred trick or treaters, but I do make some just the same.
I always make homemade hot cider, too.  It isn't so much about the drink itself, but it is the smell of the cider that makes it seem like Halloween.  I  have an old glass stovetop percolator that I fill with cider and add five or six cinnamon sticks, five or six cloves, and five or six allspice berries to it.  Once it comes to a simmer, I turn it down on low and leave it on the simmer burner.  It is a wonderful welcoming smell for our visitors.
We made Grandma Jenny's caramel corn this year.  It is a simple brown sugar caramel poured over popped corn.  I added some dried fruits and nuts, and we packaged it in zip lock bags and put a glow in the dark Halloween sticker on it. 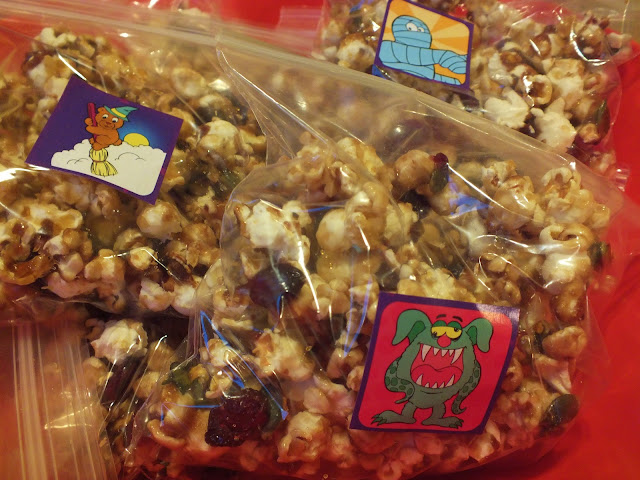 Grandma Jenny's Caramel Corn
2 C packed brown sugar
1/2 C water
2 T oil (I used grapeseed oil, but any light oil would do)
Combine all three ingredients in a large saucepan.  Don't stir, just put on high heat until it boils.  Let the mixture boil for fifteen minutes on high heat, and then pour over corn.  Spread out onto nonstick baking sheets to cool and add dried cranberries and pumpkin seeds.  After it cools and hardens, bag it up.  Grandma Jenny said to use it for a large bag of popped corn.  She bought hers already popped, but we popped our own in our Whirlypop.  It is a stovetop popcorn popper that has a crank handle on top to keep the corn stirred while it pops.  It is great fun to use.  I have seen similar models at the Big R store for less than ten dollars.  It sure beats having to buy microwave popcorn, and put up with all the salt and preservatives.
We also made caramel apples.  I haven't made caramel apples in years.  We put one of my glass mixing bowls over a pan of water that was boiling on the stove to heat the caramel.  I ended up adding water to the caramels to get them to a consistency that would coat the apples.  They sort of slumped, and were too sticky to give out to the kids, so Don will end up taking them to share at work.  We had bought some cut little Halloween sprinkles to decorate them in. 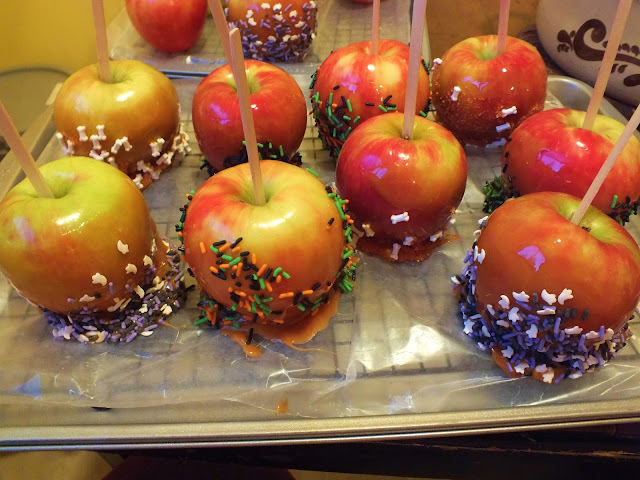 Posted by Cooking on the Sagebrush Sea at 8:47 AM No comments:

Cooking on the Sagebrush Sea
Lander, Wyoming, United States
I love to cook. When we were newly married, we lived 70 miles from the grocery store. I had to learn to plan and shop a month at a time. It was a blessing, as I learned to make menus, and stock a pantry. Even though we only live a block and a half from the store now, I still make menus, and shop only once a week for food. I want to help you use your pantry and freezer to produce yummy good for you meals at home, and not be stressed for time.