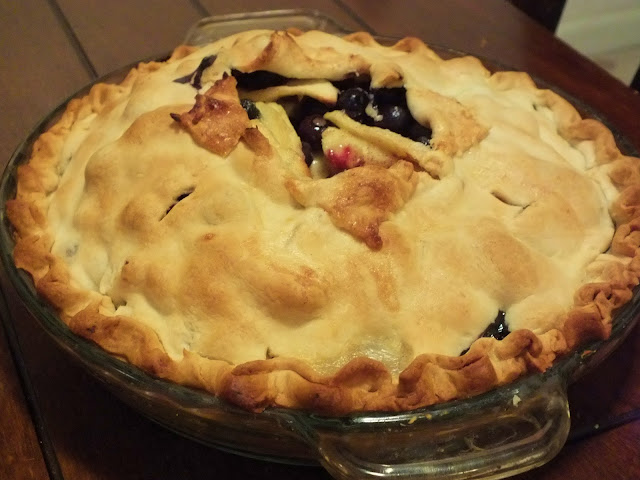 I love to make pie.  We recently had some nice blueberries for pie, and when I went to make it,  the two clamshells of berries just didn't look like enough to make a properly filled pie.  My definition of properly filled is so much filling you couldn't cram another berry in there.  So, I peeled the three Granny Smith apples that were in the fruit bowl and added them too.  It turned out really good, and I got requests to make it that way again soon!
When I was putting this together, I got distracted a few times.  Because of my distracted state, I forgot to put the butter pats over the fruit before putting on the top crust.  I remembered about the time I got it all crimped.  So this accounts for the gaping hole in the top.  Actually, it worked out well;  I got the butter put in the gaping hole, and it didn't drool all over my oven because the hole prevented it from doing that too!
I used store bought crust.  The last homemade crust I did was an all butter thing, and it was tough as shoe leather, so why reinvent the wheel?  I went back to what works.

Mix above ingredients.  Pour into bottom pie crust, and top with top crust.  Wet the edge of the bottom crust, and crimp to seal.  Decorate the top with a couple slashes, and a fork to release steam.  Place filled pie on a cookie sheet lined with foil  (I forgot the foil last time and had to buy a new cookie sheet.  After an hour, the burnt fruit syrup is not going to come off!  Bake at 400*F for an hour.

Posted by Cooking on the Sagebrush Sea at 9:40 AM No comments: 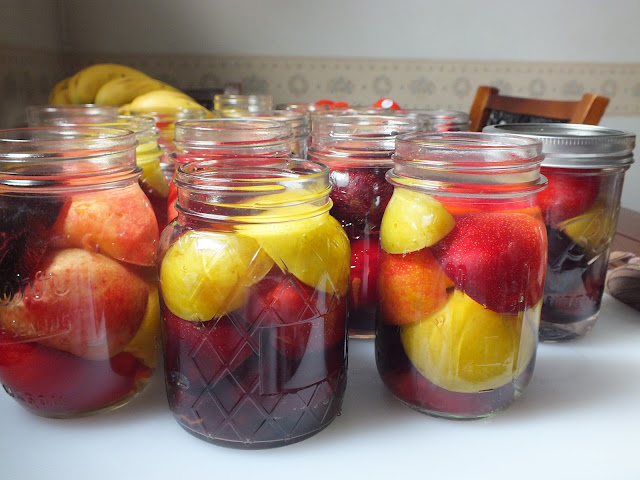 I canned plums today.  It is a trip into my childhood and food is the vehicle that takes me there.
My Grandparents were homesteaders on Buckhorn Flatts near Riverton Wyoming.  They ran some cattle, raised sugarbeets, ran the beet dump, and had a dairy.  When I was little, I loved to be at Pappa Hinkle's house.  The men would come into Grandma's kitchen after milking, and have coffee.  They ate their lunch around that table, and talked of all things.  There was humor and love always in that house.  We ate cottage cheese with syrup, and tomatoes with sugar sprinkled on them, and these wonderful canned plums.  Sitting there next to the white built in china cabinet, and looking out the window that overlooked  the chicken house, which I had a fascination for, I always felt at home and content.
I loved my Grandmother's canned plums.  Their tart and tangy sweetness is just one of those things that tastes like nothing else. The smell of the syrup alone is one of those things that makes you pause, and inhale deeply, exhaling with the word Aaaahhhh.  They should be served ice cold, or thickened in a pie.
Now that I am grown and can my own fruit, I find that plums are my favorite to can.  They are so simple.  Just cut them in half and pour over a light syrup made from 8 C water, and 2 C sugar boiled together.  Then process in a boiling water bath for twenty minutes for pints like these pictured above, or 25 minutes for quarts. No treating with fruit fresh, or peeling off skins, just plunk them in the jars and away we go!
Posted by Cooking on the Sagebrush Sea at 6:38 PM No comments:

Email ThisBlogThis!Share to TwitterShare to FacebookShare to Pinterest
Labels: Canning


My little kids all went home yesterday before five, but I had two meals worth of dishes to get cleaned up before supper.  I just had one of those days when you know if you head to the kitchen to wash dishes while the kids are playing there is going to be trouble!  It is an understatement to say that the natives were restless yesterday.  They had been on holiday the week before, so it takes a few days to get back in the groove again of getting along with others, and following Tina's rules.
I was surprisingly in good shape at the end of the workday, though, and had a good visit with my husband as I cleaned up the mess, and put the chicken in the marinade for the grill.  He decided to go ride his colt at the farm lease, so I had a pocket of time before I had to have the meal on the table.
It is just a pleasure at times to cook a meal without being hurried along.  The temperature had cooled considerably, and I started pulling out vegetables and fruits to make a plan.  I had chicken thighs ready, and put them in a zip lock bag with 1/2 cup fresh lemon juice, and a packet of Weber's Just Add Juice marinade (which is delicious by the way).  I had white potatoes to use up, and planned to make mashed potatoes to go along with the grilled chicken.  Past that, I really didn't have a plan, and because it is coming up on my shopping day, I really need to use some things up.
I found a good bunch of jalapenos that needed used up.  They were left over from making pickled vegetables.  We like poppers, but make baked ones instead of frying them.  In this recipe, the health benefits of doing that are negated by the addition of a big ole piece of bacon on top, but they are a special treat.  The play of the sweet and tangy cheese and cranberries against the hot pepper and the salty bacon is heavenly.

In a medium sized bowl, combine the cheeses and chopped cranberries.  Fill jalapeno halves level, and place them on a cooling rack placed in a baking sheet.  Top with a piece of bacon, and season with fresh ground black pepper.  Bake at 450*F until bacon is crispy and peppers are soft, about twenty minutes at my altitude.  Serve either warm or at room temperature.
Posted by Cooking on the Sagebrush Sea at 8:38 AM No comments:

Cooking on the Sagebrush Sea
Lander, Wyoming, United States
I love to cook. When we were newly married, we lived 70 miles from the grocery store. I had to learn to plan and shop a month at a time. It was a blessing, as I learned to make menus, and stock a pantry. Even though we only live a block and a half from the store now, I still make menus, and shop only once a week for food. I want to help you use your pantry and freezer to produce yummy good for you meals at home, and not be stressed for time.